Riding with the Honda Revival Team

The travels of the Honda Revival Team (@hondarevivalteam) have been making us very envious lately. The group's Instagram captures a unique journey through the rough terrain of Morocco, which can only be described as a truly "off-the-beaten-track" adventure.

We caught up briefly with Lapin and Gus to find out more about their adventures and the interesting Quad Lock Motorbike Mounts they had created. 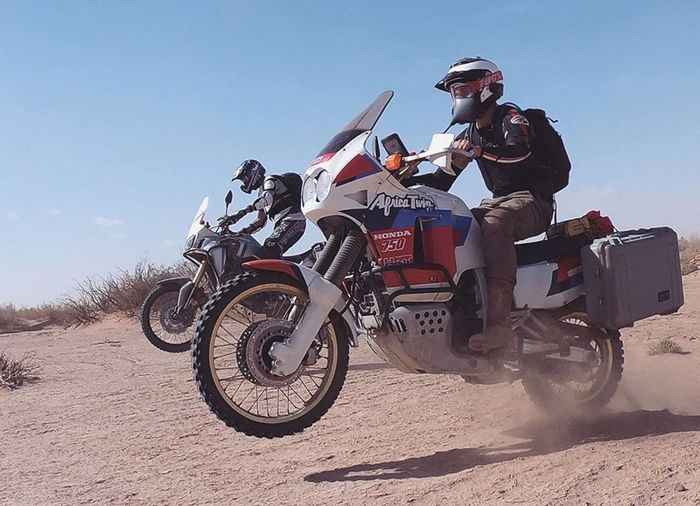 What is the Honda Revival Team and how did it start?

At the beginning of 2015, we were two cousins nicknamed Lapin and Gus, from the Bourbonnais (a remote area in the center of France) with plenty of travel ideas.

Our family is not the motorcyclist kind but we took an interest in it after many beautiful but kind-of-boring car road-trips in France and the US. Riding bikes would let us travel for a low budget in very remote places while being way more challenging than driving a car.

Having first considered Chile and Scotland, we decided mostly for financial reasons to travel to Morocco. That’s how we began to learn about the Paris-Dakar race, and even develop a great admiration for this one of a kind endurance event. 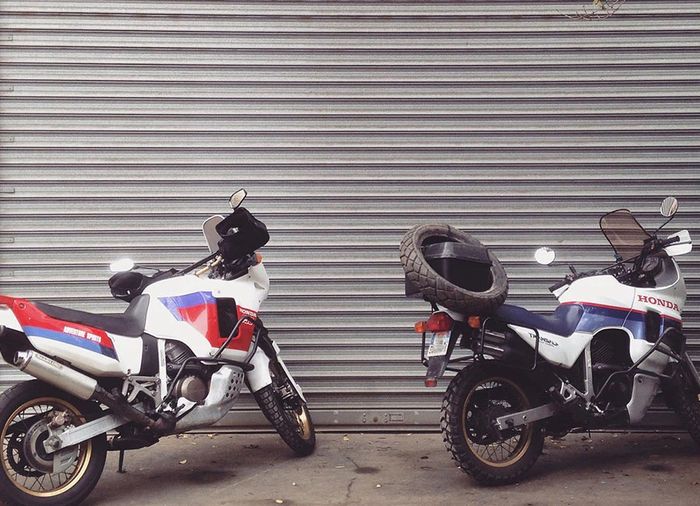 Soon after, we bought our first motorcycles: an Africa Twin and a Transalp, both from the late 80's and early 90's and inspired by those racing the famous race at these times. These bikes are totally out of fashion but very cheap, renowned for their reliability and can share a lot of parts, meaning there was less to carry and less to buy... We had to repair and prepare those 30-year-old antiques before going and spent a lot of time learning about mechanics while doing it, so when taking the road with them for the first time, after all this work to bring them to their natural element, we wanted to share our experience. To avoid boring all our relatives with motorcycle pictures we created a new account and needed a name. That's how HRT came to mind, even though we have some Suzukis, BMWs and Yamahas lost in the pack now!

Our enthusiasm must have been communicative because two other cousins joined us for this trip. A few weeks ago from today we did another trip to Morocco, we were six cousins, all but one riding Hondas...

What do you love about these old Hondas?

At the beginning it was mostly a practical choice: the 80's and 90's bikes are totally out of fashion and are very cheap! At the same time, they have very few electronics, which makes them easy to repair (kind of) and the Hondas of this era have a great reputation for reliability and share a lot of parts together. This combination was perfect for us and after many hours of working, driving and falling with our motorcycles, they never let us down and we became passionate about them! 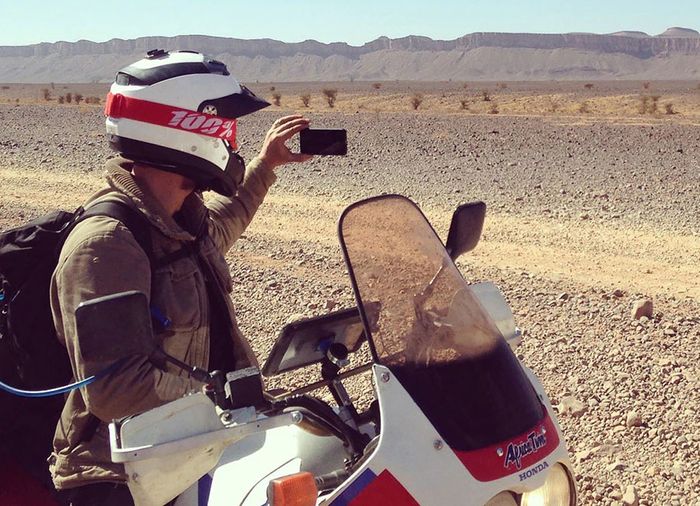 Where have you taken your Hondas?

We ride them almost every day for work or vacations, so almost everywhere on French and Moroccan roads, mud and dust! What we enjoy the most is riding off the roadway, where the only alternative to walking is riding a motorcycle, or maybe a pony...

Your visit to Morocco looks amazing. What’s the most incredible place you’ve been to?

That's a difficult question to answer, the Moroccan landscape is so diversified and there are seven of us to have an opinion about it! We were amazed at every turn while riding in the Atlas mountains, encountered overwhelming heat, sandstorms and pouring rain in the desert, cold biting through our bones at night in the mountains, rode on ancient Paris-Dakar tracks, we could ride and camp anywhere we wanted, choose any road, track or decide on our own way... so I'd say the most incredible things in Morocco are its diversity and liberty you get travelling in it.

If I had to pick a particular place though, a memory comes to mind: crossing the Anti-Atlas mountains in 2016. After hours riding off cliff edges in these very rocky mountains, the sun was setting on our way down. That's when we met a shepherd named Abdelrak who, with the help of a lot of hand gestures, proudly introduced us to his donkeys, bike and new-born goats. He explained to us that he was living in the mountains and was down there for his herd to feed on grass we could only imagine. I still have a picture of him I can't get tired of looking at. 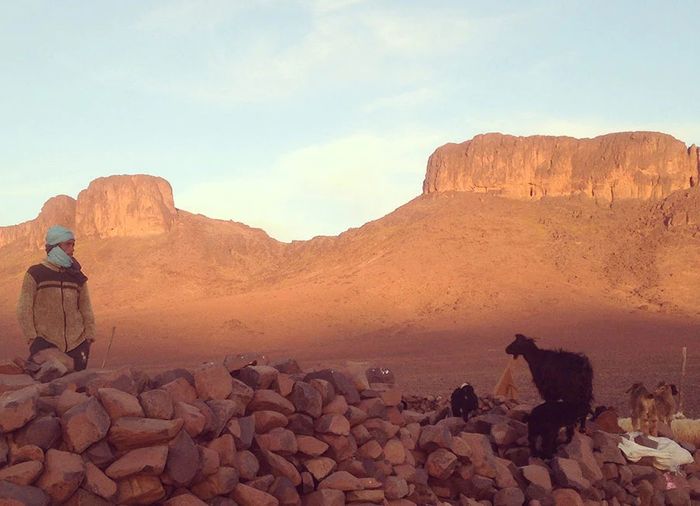 You’ve made some interesting adjustments to get your Quad Lock onto your Honda. Tell us a little bit about that.

The motorbike handlebar mounts didn't exist when we installed our Quad Locks on our motorcycles, so Lapin used his welding skills to build some metal mounts to adapt the bicycle lock.*

One of us, Aymeric, made a 3D print of an adapter that broke in a fall. The Quad Lock and the phone are still fine though! There was also a duct tape attempt that didn't last long...

For navigation in the desert, Lapin uses a tablet and just stuck a "universal adaptor" in a waterproof case. It's held for two tours in Morocco, many rides in France and still works fine. 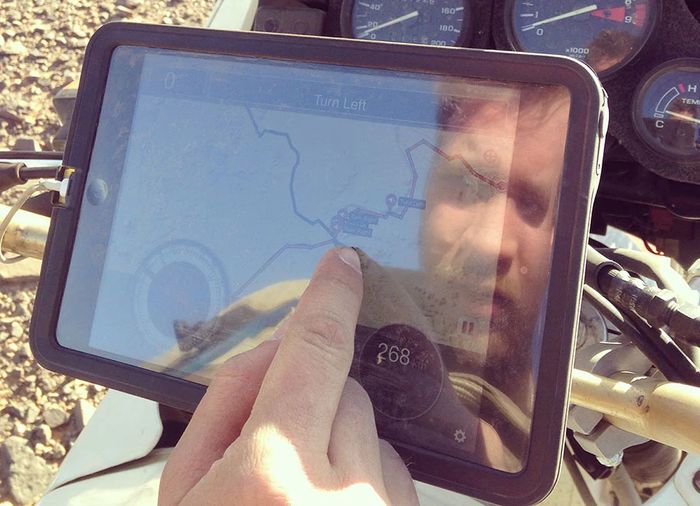 What do you love about your Quad Lock mount?

The practicality of it! We're all cousins and hang out a lot together. Almost all of us have one, we can jump on any bike and have a GPS/camera/phone.

During the first trip, I took all the pictures with an iPhone I could take in a second while riding. It helped me take pictures we don't see very often. Unfortunately, it became very slow after an update and I had to find something else for the second trip.

Lapin, who always opens the road, can use an iPad mini for navigation and have a great visibility of the map.

We have the Quad Lock car mount and wall mounts in our cars so when sharing the wheel on a long drive we can put our own phone as a GPS.

Never did our locks or cases fail us, even after a few years and many, many falls on our bikes... in these times of planned obsolescence, reliability is a thing we cherish a lot!

What apps do you use on your phone whilst riding?

That's not something to be proud of but the photo app of course! Lapin uses LeadNav for navigation, we all use GPS and I might have seen Youtube running in the car once...

Have you made any other adjustments to your bikes and what are they?

We're not racers and keep our bikes as close as we can to the original so we didn't have to do much and mainly installed protections and power adapters for the phones, tablets, cameras and drone chargers...

Apart from the general maintenance, our friend "Bobby and Claude" (don't be fooled by the name he's just one person on the outside) helped us a lot for more serious repairs. He is specialized in old Hondas and we are always welcome in his workshop, especially if we bring beers and cigarettes! 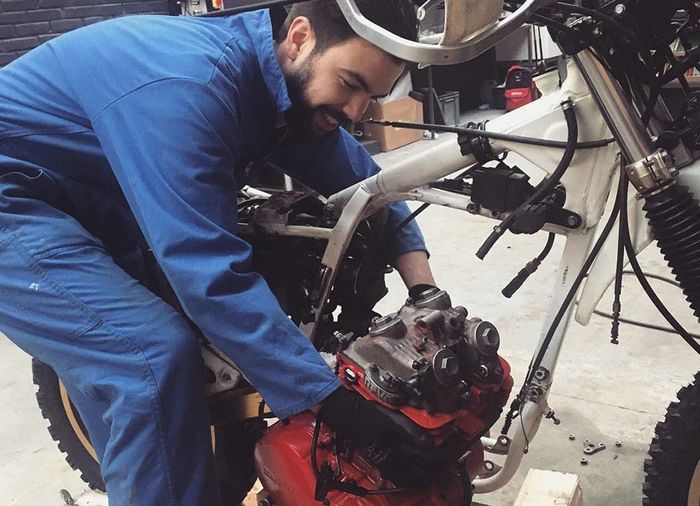 What advice would you give a group of friends looking to do something similar?

Stop talking about it and go! Don't worry about gear, meteo and falling down, there are always solutions to find at the moment...

What does 2018 hold for the Honda Revival Team?

That's still to discover... we have always been very bad at preparing and leave a lot to chance and opportunities!

We made a little book of our last trip, that might be a start... 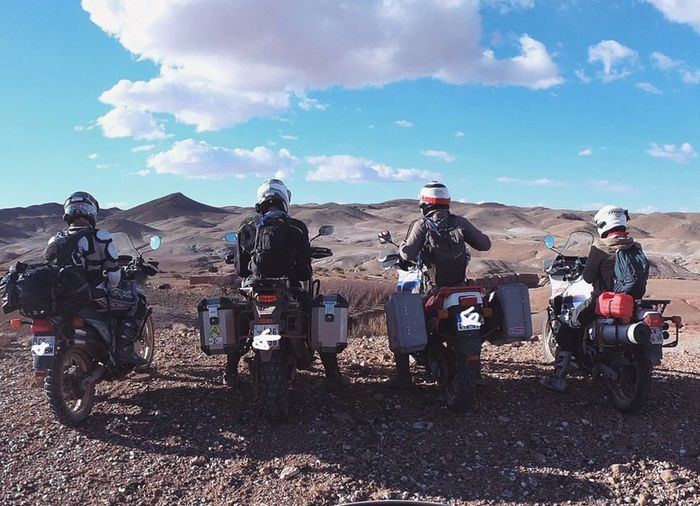 *We've since rectified this and the Honda Revival Team now have some sleek new iPhone Motorbike Mounts to go with their dusty bikes.